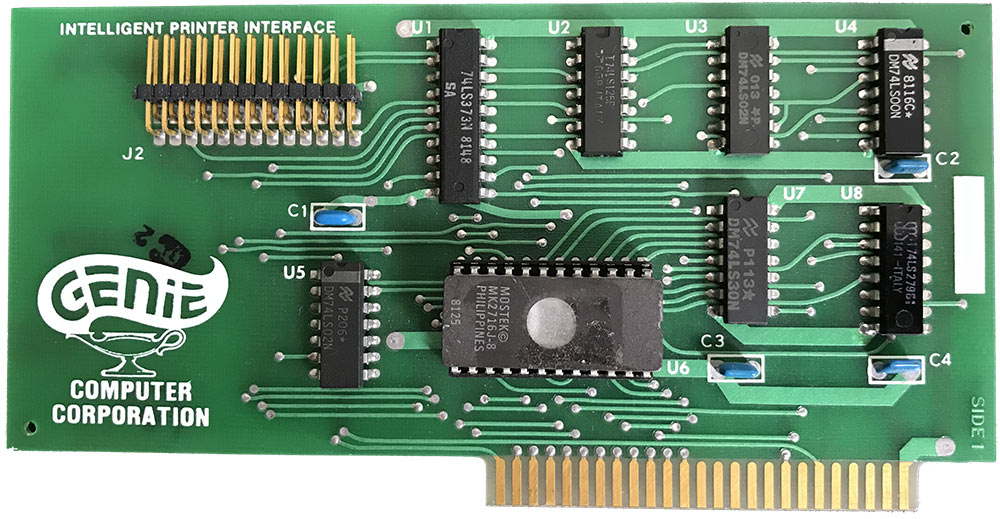 This is the first product I created after branching out on my own and starting my first company. Not having any real money to speak of, I needed to pick something within my means. The idea for a printer card came after I paid $185 for a similar Apple-branded card which I figured could be made for $20. I sold mine for $69.

I started out manufacturing the boards by hand in my apartment and selling them to local Apple computer stores out of the trunk of my car.

Within a few months I struck up a relationship with a prominent mail-order distributor in Los Angeles who took a liking to me and agreed to fund some of my other ideas. Suddenly we had a real company.

Back in those days, I didn't have access to a CAD system to arrange the wiring on the printed circuit board. Instead, I converted my glass-top coffee table into a makeshift light-box and spent the better part of a long and frustrating weekend laying out mylar strips by hand for the two-sided board to indicate wire routing and component placements. Finding the perfect arrangement so nothing overlapped was like trying to solve a multi-dimensional puzzle! Fortunately, this was the first and last time I ever needed to lay out a board by hand.

The board also included an EPROM (erasable programmable read-only memory) which contained the driver software (BIOS) in 6502 assembly language. During development, every time I made a programming change I needed to erase the chip under a UV light and then use a special piece of equipment to burn the new code into the device. It was a slow and tedius process that inspired a careful approach to coding; not to mention that I needed to make sure that the entire program fit in 2KB of memory.