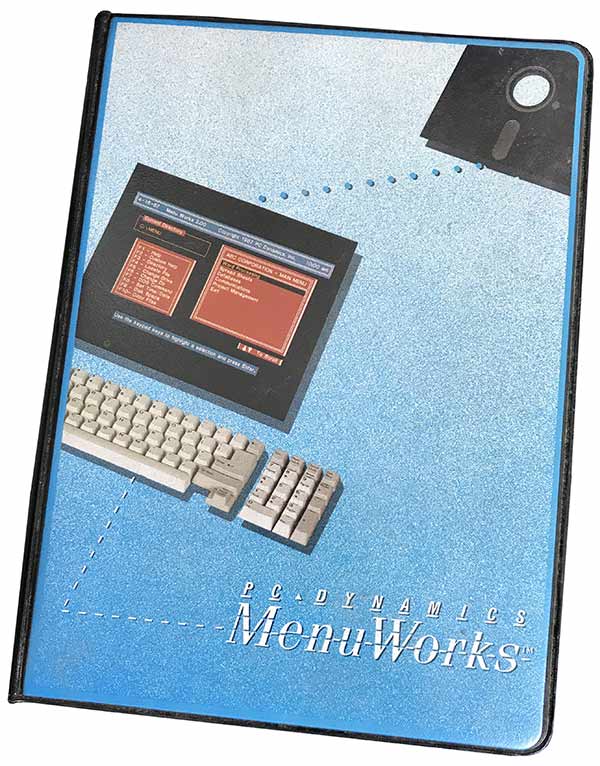 MenuWorks was my first product after starting PC Dynamics. During the early months, I did contract programming by day and worked on MenuWorks at night. The product choice seemed within my economic means and I had watched people become frustrated and confused using competitive products at my previous employer. I was always telling myself I could make something better.

The premise of the product was simple. It was still a command-line world and people wanted an easy way to run their favorite programs without fumbling with arcane syntax. Windows was still several years out into the future.

My biggest competitor was selling their product for $89, so I priced MenuWorks at $59 with the packaging shown above, which was very much in style at the time for this class of product.

Color was still a new thing. The mainstream monitors at the time supported 16 colors with an 80 col x 25 row text-only display. Mice were just on the horizon. Screens needed to be constructed using only the limited set of characters and symbols that came baked into the hardware.

These are just some of the screens. The user interface for MenuWorks v1 and v2 was identical. The only difference between the versions was the automated menu builder during setup (see below for the back story).

Pretty much everything. For a while, it was just me, myself and I. I started PC Dynamics in 1986 with only $5,000 in the bank and hoped for the best. The code was written in C++.

This is the very first ad I ran for MenuWorks which appeared in the classified pages of PC Magazine in the fall of 1987. That's all I could afford at the time. Stuck in the back like that, it went pretty-much unnoticed. 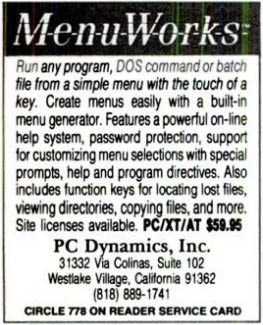 Doom, and then a Spark of Genius

MenuWorks had a slow start. As much as people liked the product, I simply didn't have enough money to promote it. The small magazine ads weren't working, so I hired a salesman to go door-to-door and visit mom-and-pop computer stores throughout Southern California.

The strategy was to install MenuWorks on the stores' machines so their customers would interact with it as they looked at the computers, and hopefully buy a copy for themselves. It seemed like a great idea.

The feedback was pretty instant. My sales guy, Jim, told me the store owners would give him about 5 minutes of time and then send him on his way. That simply wasn't enough time to even get the product installed for a demo. However, the few who waited for the demo really loved the product.

Jim was frustrated. He told me that unless I got the install time down to a minute or two, including having all the menus built up to launch the applications already installed on the stores' machines, we were doomed.

But still, we knew we had something because many dealers loved the product and we were a hit at the local swap meets -- yes, we did swap meets!

After some serious sole searching it became clear that the only way to remove the sales friction was to automate the entire process and recraft the installer to magically find, identify and categorize all the installed applications on users' PCs and configure them into MenuWorks from the get go. But how? There were thousands of popular applications.

Writing the code to do this wasn't the problem. The logic was pretty easy to work out. The real problem was that the data needed to make the magic happen simply didn't exist. I needed access to over a thousand packaged products so I could note the file names and file sizes of their core executables and identify them during setup by scanning users' hard drives.

The solution was fairly obvious. I pretty much needed to break into a big computer store at night and tear open all their shrink-wrapped products and look at the diskettes to get the data I needed.

Hoping to avoid a felony conviction, I instead befriended the manager of a nearby Egghead store and schemed up a plan for him and a few trusted accomplices to come back to the store after hours for many days on end and open up all the boxes, record the file information I needed from the diskettes, and then re-shrink-wrap the boxes -- like nobody was ever there. It was perfect!

I soon had everything I needed to build a killer automatic menu builder that recoginized over 2,500 applications (after including shareware/freeware apps) and created categorized menus for them in under a minute.

This was the only change made to MenuWorks for version 2. It was all about those first two critical minutes during setup, and making it so customers never even needed to look at the manual because there was nothing else they needed to know.